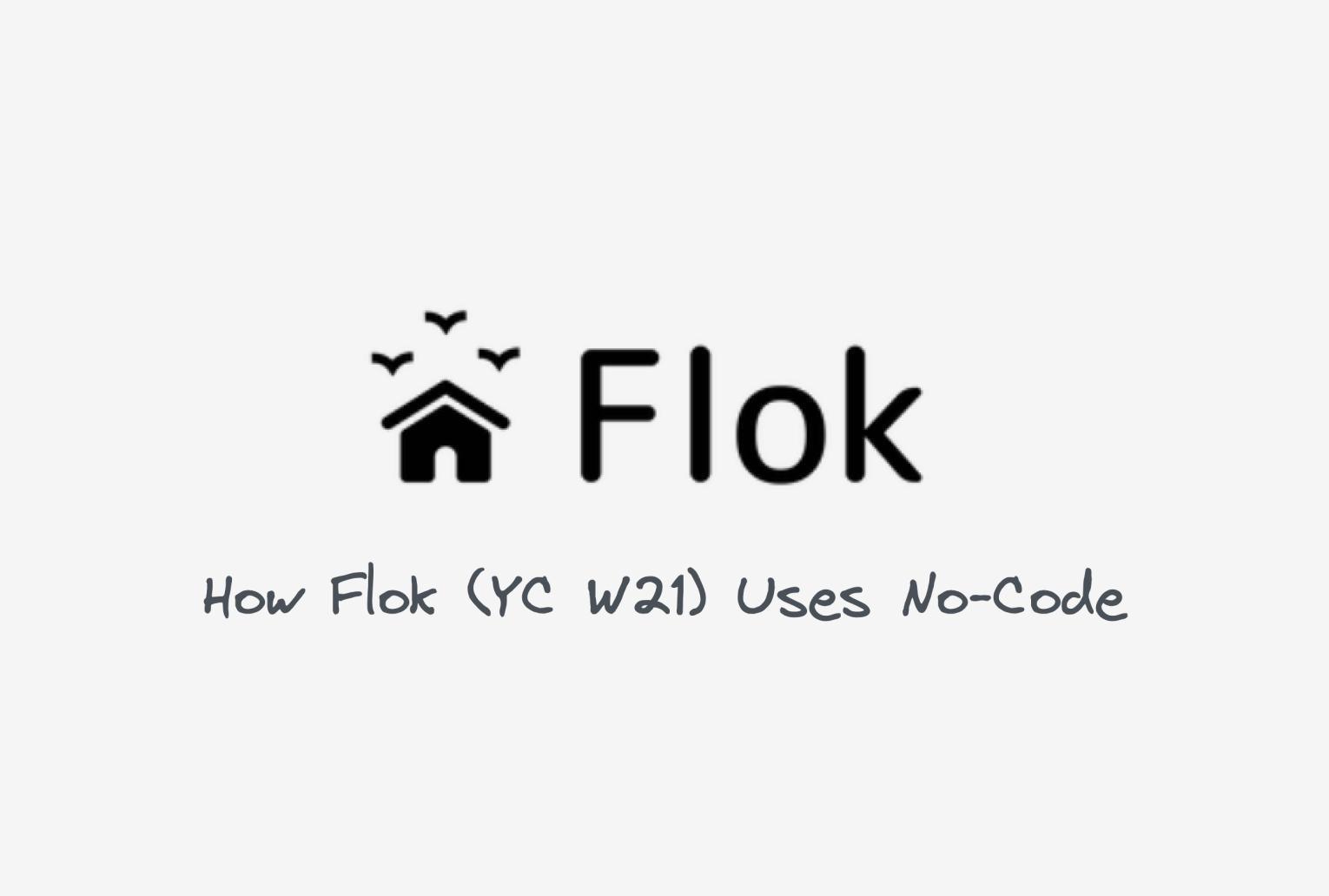 Last week I had a chance to sit down with Jared Hanson - cofounder and CTO of Flok (YC W21). In our conversation, Jared shares the insight that led him to found Flok as well as the no-code stack he’s using to operate the company.

Flok is one of the most exciting companies to come out of the YC W21 batch, and Jared is a fascinating founder. The beginning of this post covers our interview, followed by a deep-dive into how Flok uses Retool specifically. The conversation gives context on Jared’s no-code journey, while the deep-dive provides an inside look at Flok’s Retool setup.

1. Can you tell me a little bit about Flok?

Flok is a service that helps remote-first teams get back together by planning and managing company retreats. As more companies go remote, the one thing that's never going to change is the need to maintain team culture. When establishing this culture, nothing will replace the desire to meet your coworkers face to face.

The goal of Flok is to enable people to get back together in a more efficient way. We're making the experience really easy so that you don't have to pull your hair out to plan a retreat.

2. Can you tell me a little bit about yourself?

I'm born and raised in the Bay Area. I went to MIT, studied computer science, and played football as well. After MIT, I worked at Apple for about two years as a software developer, but always knew I wanted to go the startup route and do my own thing. That's when Harris and I linked up.

3. Why did you and Harris start Flok?

Harris and I had been roommates in San Francisco while I worked at Apple. I had quit my job and Harris was looking for something new as well. We linked up and started working on a separate idea as part of the YC Winter ‘21 batch. I think we quickly learned that you’ve got to really be sold on the problem that you're solving and that’s how we stumbled upon the idea for Flok. One thing we’ll always believe is that there's a real problem to be solved. It's a matter of us being able to scale up our solution so that we can service enough companies to grow into a big company ourselves.

4. Did you always know retreats would be the right solution?

Yeah, it's funny because in some ways you're always skeptical. Like, okay, is a retreat just getting your company together? Do people even like it? I think the second that you go on your first retreat with your coworkers you realize how special it is.

Going in maybe I didn't want to spend three days straight with the team or fly across the country. Coming out of it, you go wow, I never knew this person was six foot five haha. You develop completely different relationships with coworkers.

It's hard to really get a feel for somebody's personality over Zoom all day long. I’m honestly completely sold on the value of getting your team together to maintain that culture. When you get back on Zoom, it actually makes things smoother in many ways. It's hard to wrap your mind around until you've actually done it.

5. As someone who’s technical, what’s your relationship with no-code?

My relationship started with staying away from no-code almost. It was just easier in a lot of ways for me to build things myself. Back then I thought, no-code is great, but as soon as I want to build one custom thing I’m screwed. I definitely started out more skeptical.

Now, as a founder, there's just a million things to get done. I just don't care anymore if I don’t have customized functionality as long as it gets 90% of the job done. You start off the journey and you want to do everything perfect. You want to set up your infrastructure and set up all this other junk. Then you realize it doesn’t matter if I’m going to be able to scale to a million users yet. I just want to make sure that I can get a hundred users. I think that mindset definitely shifts as you start to get into more of a startup grind mode. No-code really makes the difference there.

6. Which no-code tools do you use at Flok?

Retool is the main no-code/low-code tool we use, but our stack includes:

7. Why did you decide to use Retool?

Before we started working on Flok, I was building another product that was essentially a news feed that summarized news for you. I built custom admin dashboards for that. What I quickly realized is that even though I'm not styling the admin dashboard, it’s still just way too much work to develop and ensure there's no bugs. Now you're maintaining two separate apps in a way. I quickly went looking for another tool and came across Retool.

Retool has been our biggest no-code tool and has a ton of usage. Again, I don't know if Retool is technically “no-code” or “low-code”, but it makes life a million times easier. Just to have those pre-built UI components and being able to make edits that aren’t tied directly into a deployment life cycle is huge.

8. How many people at Flok are using Retool?

We have a hotels team and a retreat planning team. The hotels team has two full-time employees and three contractors. They’re the team that’s using Retool the majority of the time because they need tons of information in order to gather hotel proposals and requests.

Our retreat planning team is about 20 contractors right now. They're the ones responsible for actually helping you plan the itinerary and all the events. This team uses Retool less at the moment but the goal is that we're eventually going to manage all of our content and the entire retreat workflow on Retool.

9. What’s your biggest frustration with no-code?

Something that I've found is not the best with no-code, in general, is the documentation. Coming from a programming background, I was trained to search through Google efficiently. I think it's much harder when you’re using a particular no-code tool to have some of your questions answered. When I run into problems, I need to find how someone fixed this on Retool specifically. Retool certainly has some resources, but it's just different. It's not quite like StackOverflow. Until the community is as big as the Python community, for example, you're never going to get as much support as you're used to as a traditional developer.

When a company signs up for a retreat on Flok, they go through a sign-up flow that pulls all the necessary information into the Flok database. This sign-up flow collects the number of employees going on the retreat, the dates, and more. Jared built a Retool app that enables his team to manage these retreats. This app includes a “Retreats Dashboard” that links to individual “Retreat Pages”.

The Retreats Dashboard gives Flok an overview of every company signed up for a retreat. Here Flok users get a quick overview of retreats grouped by current or canceled. Each row has critical information about the retreat and a link to the dedicated retreats page with more details.

While all this data is stored in Flok’s database, Retool is what makes it accessible. Without Retool, account executives would need to write SQL queries to access the data. Instead, Retool presents important data in a simple display. Additionally, presenting this data in a Retool app is more secure than giving database access to the entire team.

When users click the “View” button on the Retreats Dashboard, they are taken to a dedicated retreats page. This page allows Flok’s retreat designers to manage and plan a trip.

By toggling “Edit Retreat Info,” they can change details like the dates, hotel, and number of attendees.

At the bottom, Jared also added a section for users to leave notes. This notes section makes it easy for retreat planners to keep track of any updates and coordinate with the team.

All these Retool pages interact directly with the Flok database instead of Flok’s APIs. Because Retool has direct database access, Jared doesn't need to spend time developing API endpoints. It also maintains the "no-code" nature of the app.

All the images and information for this page are managed via Retool. Simple table blocks show all the current destinations and hotels Flok offers. By clicking “Add Hotel,” Jared’s team can include new accommodations in their offering.

By clicking “Edit,” a user can go directly to a dedicated page for that hotel or location. Here users can add images using the blue “Upload” button in the top right. These files are uploaded directly to Flok’s S3 bucket in their Amazon cloud.

With two simple pages, Jared created a CMS for Flok entirely in Retool. Although there are plenty of standalone CMS services, building a CMS in Retool allows Flok to keep its internal tools centralized.

Matthew is the co-founder of Whalesync. He's been a no-coder since the ancient days of WordPress and thinks a lot about product. 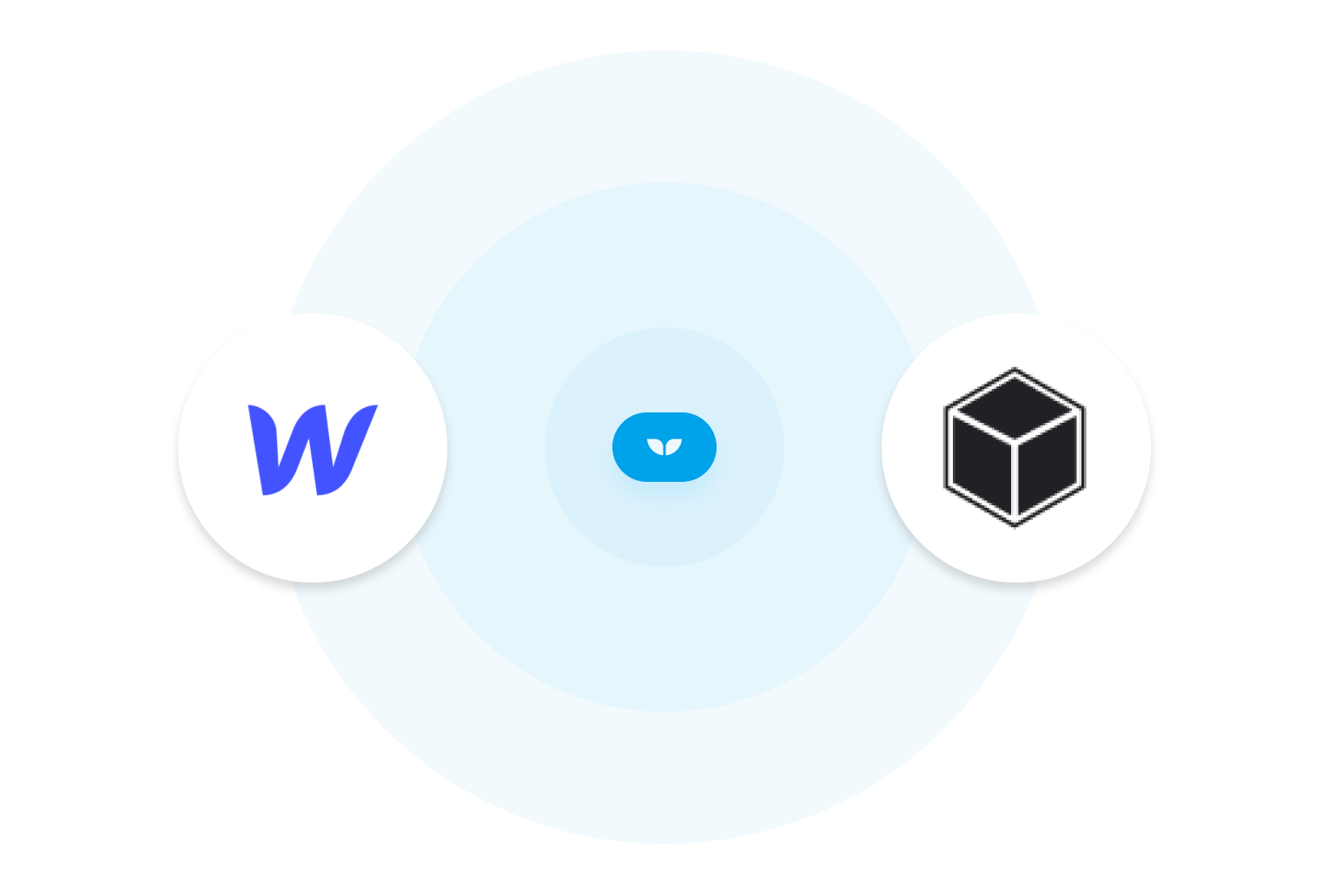 How to sync Webflow and Vertex 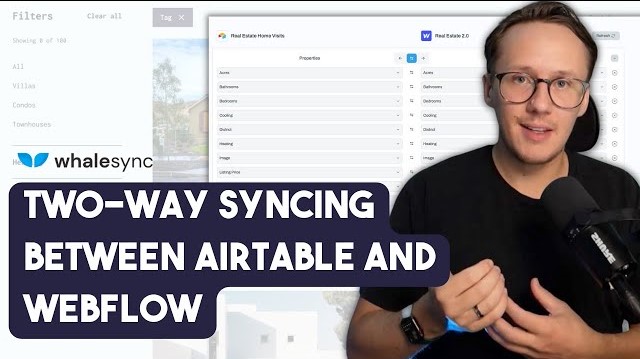 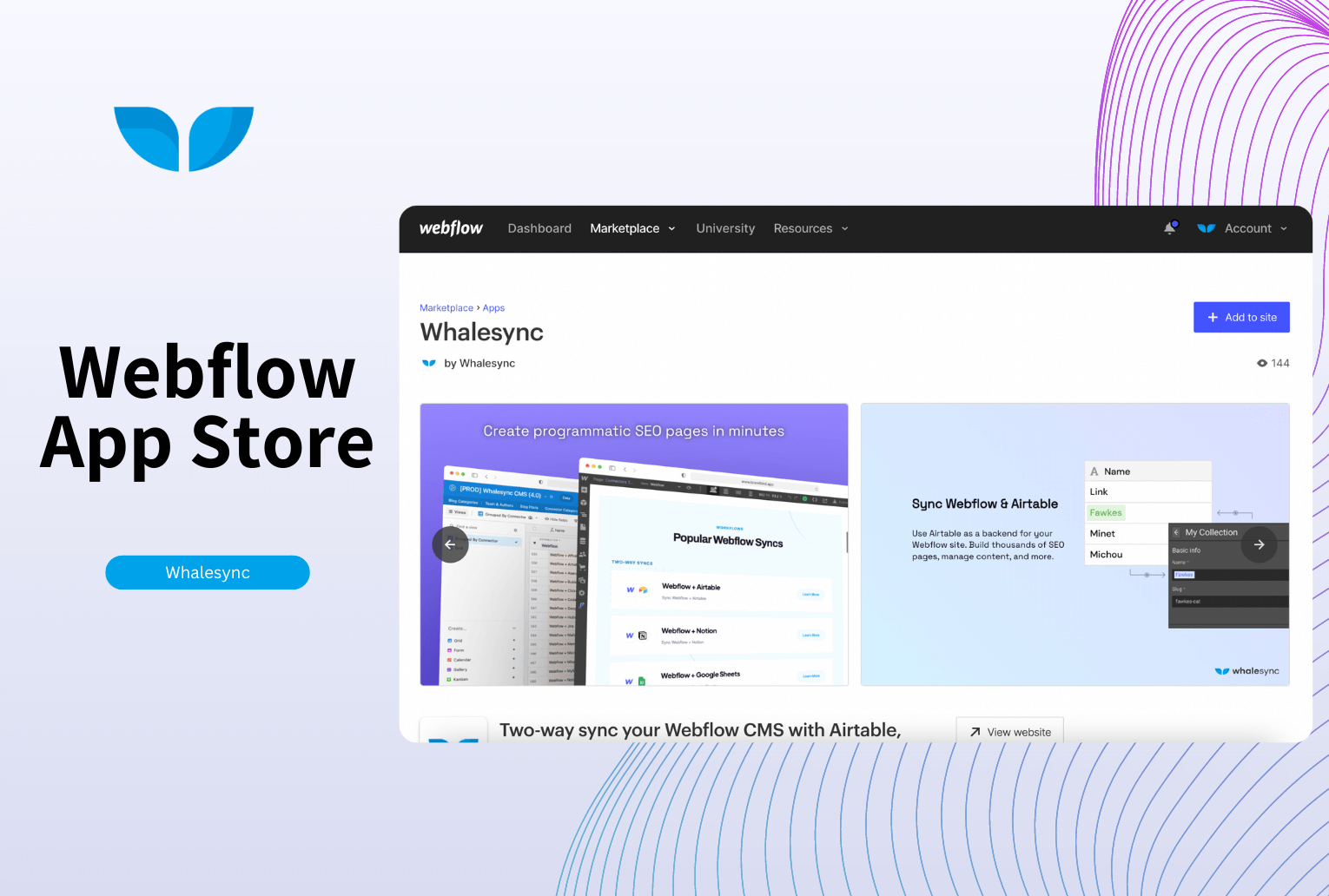 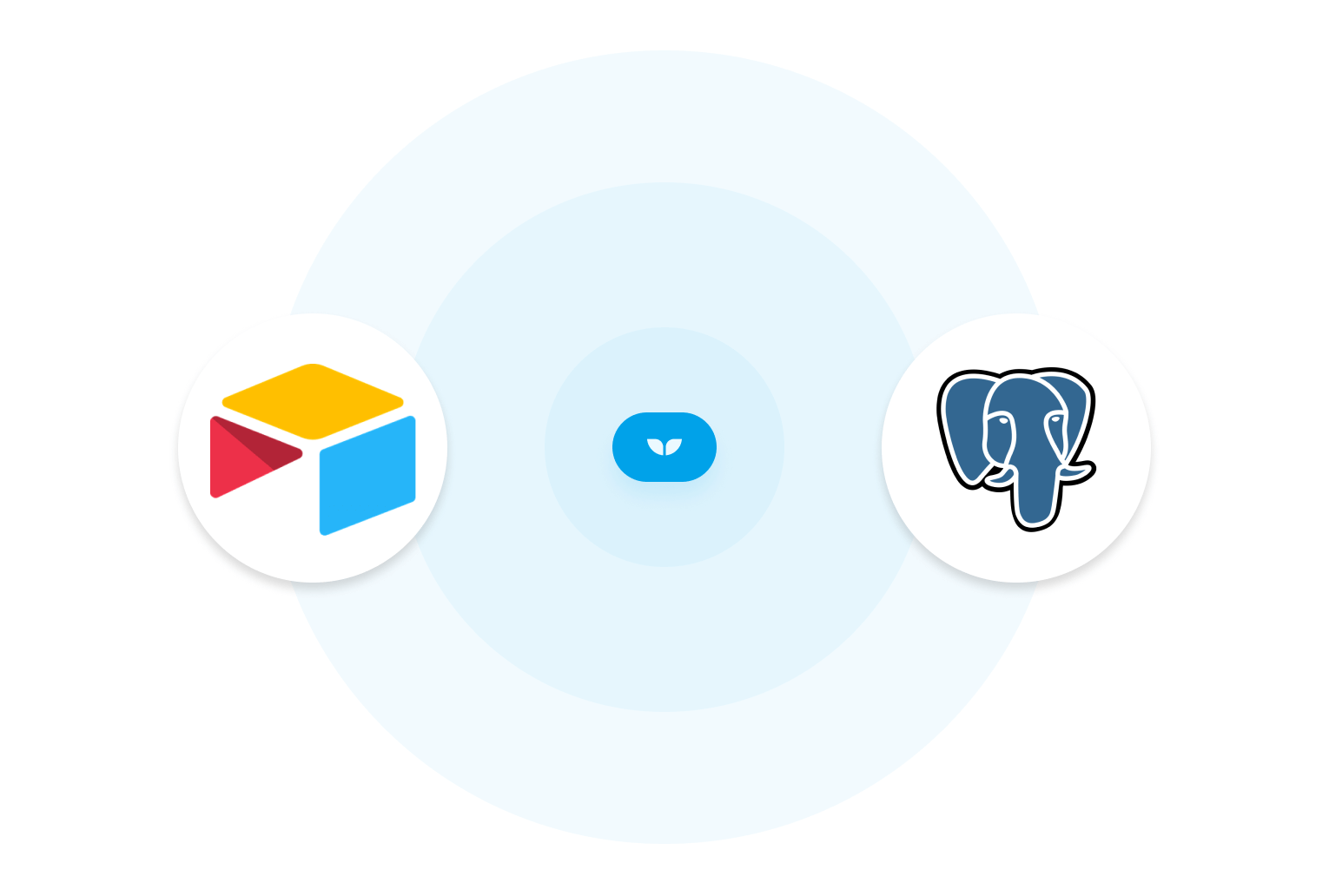 How to sync Airtable and Postgres with Whalesync